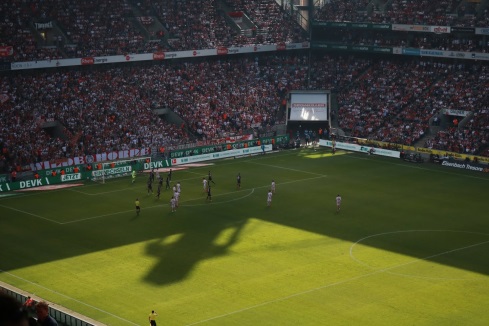 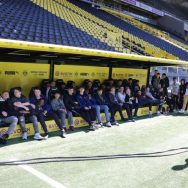 Day 1 – After a long tiring journey we arrived in Koln at midday. We first had a welcome meeting from a random stranger who wanted us to tow his truck off the grass, this would have been impossible from a bus, but it did make everyone chuckle. We then pulled into the training complex of FC Koln and were met by our football coach for the week, Fabrice; we then went for lunch in the FC Koln restaurant for much needed sustenance. The training was on a 3 g pitch in a beautiful setting of woodland and lakes. The training for the U17 side was technical with a lot of new ideas being put across that would help the students develop. The U14 side was coached by another Koln coach called Julian, he emphasised ball control and movement, essential for this age group. The session finished with a warm down and an overview of what to expect over the next few days. The hotel was a good choice with the rooms in one corridor overlooking the impressive Koln Cathedral. The 33 excited students took to their bed ready for the next full day.

Day 2 – An early start did mean a few tired looking boys, this however dissipated when we pulled up to the training ground which was overlooked by the Koln Football Stadium. The two football coaches met us and the boys soon started to focus ready for training. The weather now was touching 20 degrees and made a pleasant change to the wet weather at home. The training session lasted for 1½ hours and then we boarded the bus for a tour around the Borussia Dortmund football ground. The journey took us through some beautiful German villages along the magnificent River Rhine. The stadium tour was fantastic, made so by the enthusiastic tour guide. He told footba 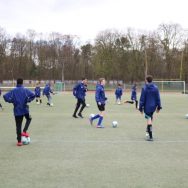 ll stories and gave a good insight into the working of a German football club. The boys got to stand on the famous wall of Dortmund and sat in the dugout along with seeing the changing rooms. Time was available afterwards to visit the shop and many bought replica shirts and souvenirs. We then boarded the bus to get ready for our football games against a German local side called Pulheimer Sport Club. This was a great experience for the students as they were playing an established football club founded in 1927. The U14 team came up against a very big and organised football side, one boy was over 6 ft 5” while Alex M.C. is under 5ft, although they worked extremely hard they lost the game heavily. Gareth S. and Agi J. were men of the match with Josh High scoring the Ruthin goal. The U17 was a very close game and Ruthin were by far the better side. There were many parts of the game where the training was put into action and this gave positive results. Taewoo K. and Thomas B. scored for Ruthin with Tom’s goal being scored from 25 metres. This, however, was to no avail as the hosts won 3-2. It was a great performance that we did not deserve to lose with Ruthin having many chances to win the game. We boarded the bus and returned to Cologne and the very tired students slept well that night.

Day 3 – A very tired squad reported for early training. This mainly consisted of a good stretching session and small sided games. The session finished, followed by lunch at the club restaurant. This day was match day for Koln and there was a lot of security and television crews around. We then went back to Koln for a short sightseeing session of the city. The cathedral and waterfront were magnificent, especially as the weather was in the mid 20 degrees. There were a lot of football supporters around soaking up the relaxed atmosphere. We made our way to the ground which is set in parkland surrounded by lakes. The walk up to the ground must be one of the most pleasant in the football world. There were 50,000 spectators in the ground which was built for the 2006 world cup. The atmosphere was phenomenal especially when the teams came out to the Koln version of the ‘Bonny banks of Loch Lomond’ a unique start to a game! The game ended 1-1 with Koln now looking like they will be relegated. We then went back to the hotel for food and a stretch of the legs out in the local area.

Day 4 – The last morning started with a training session and lots of photos with the coaches who had been fantastic throughout the tour. We ended up playing a mini world cup which left the tour on a high. The best students in training were Jack D. and Edmond A., their attitude and willingness to learn stood out. The return journey was uneventful and straightforward especially with no lorries being on the road since it was a Sunday. That was until Mr Rimmer gave the 6th form a laugh by walking into a glass door in Calais! This was a tiring, but an excellent tour with the football coaching and facilities being outstanding. Koln is a lovely place with history and culture and very much worth visiting.