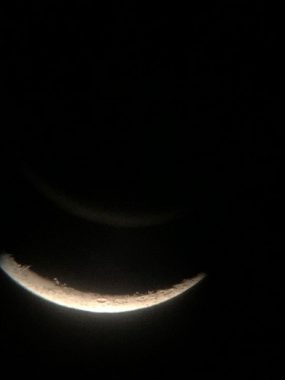 Ruthin School may, like all others, have switched to remote learning, but the staff and pupils have been enjoying the experience of making homes into classrooms, even into science labs. Across subjects and ages, there has been a positive response to tasks set.

In their Chemistry lessons, Form 1 have learned how to make rock candy with some colourful posters as a result.

2: Boil and mix them until smooth

3: Pour the solution so it fills about ¾ of each cup (approx 2 cups)

4: Cut your skewer so it is a bit bigger than the cup

5: Dip half your skewer in cold water then roll it in sugar (this creates a base)

6: Put your skewer into the solution then put the clips on so the skewer stays in place

7: Wait several days for the crystals to form

You have now made rock candy! Science magic!

Form 3 English pupils were encouraged to watch theatre which had been streamed live and one pupils found one performance particularly enjoyable.

Mr Swallow: Houdini is a live comedy theatre production that I was able to view online via Soho Theatre on demand. It was hilarious from start to finish with quick paced, engaging performances from all three cast members lasting 64 minutes which was the perfect length to keep the audience’s attention. The play was a recording produced by the Pleasance theatre and was released online to raise funds for NHS charities during the current COVID 19 pandemic. It is written by Nick Mohammed.

The plot involves 3 cast members named Mr Swallow played by Nick Mohammed, Mr Goldsworth played by David Elms and Jonathan played by Kieran Hodgson. The stand out performance comes from Nick Mohammed though as he attempts to recreate Houdini’s famous escape from a padlocked water tank in the final act. Leading up to this there are several different acts including a visit to Houdini’s doctor, a seance to contact his dead mother and magic tricks that go wrong, all interspersed with comedic songs which adds to the jovial and informal atmosphere created between the cast and the audience.

His fellow actors are constantly trying to keep the story on track; however, they struggle to keep Mr Swallow on topic as he frequently gets sidetracked and starts rambling on about irrelevant topics. One of the funniest examples of this is when he plays Houdini attending his Doctor’s surgery and instead of him following along with the storyline he starts to mumble on about how to make a deconstructed jacket potato. He keeps slipping in and out of character and these are the moments that create the most laughs and unexpected twists and turns. There is plenty of physical comedy especially in the magic acts and perfect comedic timing. The actors have great chemistry and are able to slip in and out of character frequently but then rejoin the storyline just as easily.

The stage was small and had a number of magic trick props. The most prominent one was the watertank which provided the tension filled end escape scene. They used a wig whenever they wanted to portray his dead mother and one of the cast wore a basic grass skirt when pretending to be Houdini’s wife. The props were simple but very effective and suited the fast pace as the story quickly jumped from one scene to the next. The atmosphere changed quickly throughout from comedy to nail biting tension at times and this was largely done through the use of the piano music which was very effective in creating suspense during the final escape scene. The lighting would darken every time there was a potentially scary moment and spotlights were effective in making the audience focus on characters in particularly anxious moments.

The songs were essential to the biographical storytelling of Houdini’s life and the lyrics were entertaining and funny and added to the overall hilarity of the production.

This was a fun filled hour of unpredictable and hilarious stories leading up to the climax of a death-defying escape from the water tank that genuinely made for tense viewing. The song at the end was asking the question as to why we like to watch life threatening stunts for the purpose of entertainment. Overall, I cannot praise this production enough and would thoroughly recommend anyone to watch it as it is an hour of your life you will not regret.

Form 4 astronomers continued their work beyond the classroom and took some beautiful photographs – a close-up crescent moon and one of the moon and the planet Venus. 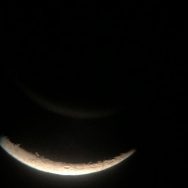 Form 5 English pupils have used their time to engage in reading and reflection.

I have a little cousin who lives in Lancashire that I am very fond of. She is really sweet and always wants me to read stories to her when I see her. I am not able to do this at the moment; so a couple of nights ago I said I would read her a bedtime story on FaceTime. It was a story that was read to me when I was her age and it was called “The Dancing Tiger” by Malachy Doyle. It is a gorgeous little book with wonderful pictures and flows really well when read aloud.

After I had read the story and said goodnight to her, I spent some time looking through the book again and seeing it through fresh eyes. Looking at the book as a 4 year-old, I realised that it was all about fantasy and excitement and danger that led on to comfort and security and warmth and love as the little girl discovered the tiger in the woods. Whilst this would be quite scary she realised the tiger was kind and friendly. Every full moon she would dance with her secret friend in the woods outside her house. The wonderful pictures show the kind face of the tiger, the smiling little girl in her nightdress dancing through the seasons of spring, summer autumn and winter for lots of years. It gave off a warmth of things familiar to us and things that are so important to help us feel safe and comforted.

The book ends with the little girl now being a grandmother and passing over that joy to her little Grand-daughter who then takes her place. The book ends with the grandmother? looking fondly on at her Grand-daughter and the tiger dancing together. For a young child it is about fun and fantasy and all the safe familiar things of home and love and warmth and family, which is as it should be for four year-old children!

Looking at the book again through more mature eyes I began to see an altogether different tale. Whilst it is undeniably beautiful there is an almost unbearable tinge of sadness and loss. The grandmother has lived her life, her “dancing days are done” and her life is coming to an end. She wanted to pass on her life experiences and all her hopes and dreams to a young version of herself once more. It speaks to me of how valuable and precious life is — and also how important family ties and family relationships should be to us. The passing seasons represent life moving relentlessly forward into old age. The grandmother was lucky in that she has had her life and raised a family and has a Grand-daughter to continue the family line. There is a really deep yearning and poignancy to this story which I found very touching, especially in these strange times we find ourselves living in. It made me appreciate everything that I have and somehow changes your perspective and alters your values. All that from a short, bedtime story “The Dancing Tiger”.