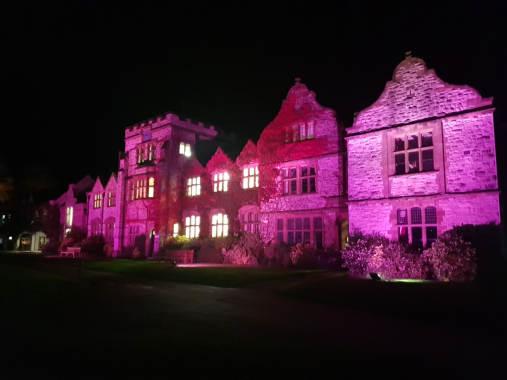 On Tuesday 28th February, 30 members of Forms 2 and 3 set off in some trepidation to Theatr Clwyd in Mold for a performance of the Gothic horror classic, Frankenstein. As it turned out, the atmosphere was spooky and eerie rather than merely sensationally “scary”. We were encouraged to feel sympathy for the monster as well as his creator and there was wit and wisdom, as well as shock and horror. Here Anna from Form 2 gives her views:

I had high hopes for Mary Shelley’s timeless masterpiece, Frankenstein, and this performance adapted by Rona Munro truly lived up to its legacy. Incorporating the use of Shelley herself as a character really was a genius touch, showing just how the author puts a piece of themselves into every character they write.

One thing I would like to highly commend is Munro’s creation of the psychological aspects of the story, such as Frankenstein’s self-doubts. These reflect the feelings Shelley must have experienced during writing what would be a novel deemed improper for a young woman during that time period.

The true aspect of this show lies behind the horror we see, right into the mentality of fear, chilling us to our bones.

There were some excellent gems of acting at its finest on display during this haunting play.

I must comment on the actress who played Mary Shelley herself, Eilidh Loan, for being a spectacular performer who really bought the show to life. I feel the need to mention that this play was put on by only 7 actors and actresses, and that these inspirational people could make such a performance with such a limited cast, though you would never know watching it. That, indeed, is acting.

Therefore, I cannot recommend Frankenstein enough. With the combined aspects of the mentality, the horrors, and an excellent cast the performance on show in Theatr Clwyd really was a spectacle to see.