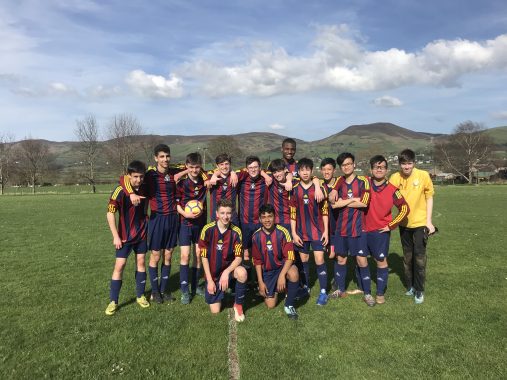 The final football game of the season took place in perfect football conditions. Both the U18 and U16 teams were pitched against our academic rivals, Concord College.

The games were played with great sportsmanship and provided a fitting end to an enjoyable season.

The U18 game was very close with the better football being played by Ruthin. However, Concord took their chance when it arrived. Ruthin took the lead through a sharp finish from Alex M, but the lead did not last long as Concord struck back, making it 1-1 at half time. The second half was all one way to Ruthin and it seemed that the breakthrough would never arrive. Then, with 5 minutes remaining, Iestyn rose the highest from a corner and headed the ball into the net. The Ruthin defence then held out giving the victory to Ruthin 2-1. All the team played well and for the Upper 6th students who are leaving it was a good ending.

The U16 team took to the pitch eager to gain revenge over their previous last minute defeat at Concord. They started the game well and deserved to lead through Josh H. A penalty was awarded to Ruthin and Oliver D had the chance to increase the lead, unfortunately the ball rebounded off the bar and was cleared to safety by Concord. This was soon forgotten as Ruthin pressed and forced an unfortunate own goal. This gave a 2-0 victory to Ruthin and revenge for the defeat earlier in the season.