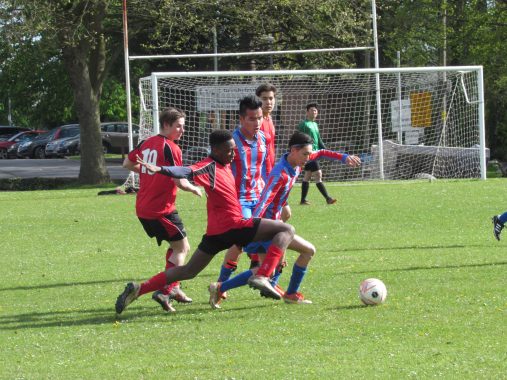 With a decent crop of new footballers in the Upper Sixth, as well as a number of older veterans and talented youngsters, Ruthin entered the football season with some hope of performing well. The first match saw Ruthin travel to Oswestry, where Layide continued where he left off, scoring his first very early on. Goals from Elliot and George sealed a comprehensive 0-3 victory despite the new squad’s lack of experience playing with each other.

This apparent lack of chemistry led to a disappointing result at home against Shrewsbury, losing a hard fought battle 2-3. However, our team reacted well during the next away game at St. David’s (without captain Arun) by winning 1-3, with Layide bagging an excellent hat-trick. Unsung heroes Mikita and John in midfield were particularly important in taking control of the games.

Our midfields were joined by Tom at the Concord match. After a slow start, Ruthin started to dominate the play and won comfortably 1-5. Ruthin’s depth was showcased with goals coming from Finlay, Taewoo, Mikita and Layide. The players then travelled to Kings, many of whom remembered being beaten by the Chester school the previous year. In poor conditions, Ruthin prevailed to exact revenge, Layide bagging another hat-trick and the defenders retaining concentration to win 3-1.

Ruthin’s strong form convinced their Manager, Mr Rimmer, that the players were capable of adapting to a new formation with Arun, Elliot and Osian taking charge of the defence as a back three, giving wing-backs Iestyn and George more freedom. It was this solid base that saw Ruthin dominate Oswestry, Iestyn scoring from wing-back, with two goals apiece from Layide and surprise package Finlay, who had begun to make a habit of being in the right place to score. This 5-0 win buoyed Ruthin, who were looking unstoppable. The new system was confirmed as the best way to play, with Ruthin’s next match against King’s second team (while the first XI played a professional youth team). Kings began the game strongly, as clear favourites, but it was Tom that broke the deadlock, giving Ruthin the impetus to start winning individual battles on the pitch. Ruthin overcame the odds to beat Kings well, defenders Arun, Elliot and Osian doing especially well in limiting Kings to a single goal. Goalkeeper, Samuel, took his performance to a much stronger level this year. Ruthin showed no mercy, Taewoo, Finlay, Tom (twice) and Layide (with his third hat-trick) beating Kings 1-7.

Ruthin’s season ended at home with a poor showing, losing 1-2 to a Concord team. Despite this disappointment, the team can look back on an extremely successful year, having played some excellent football. A fitting ending to some players’ time at Ruthin school, notably Arun and Mikita (who have played for the Ruthin School team since Form 3/4 respectively). The team’s most important attribute was balance, with strength throughout every position on the pitch, players able to trust each other and everyone having a willingness to fight for the team. 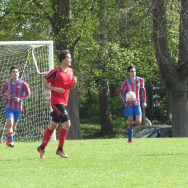