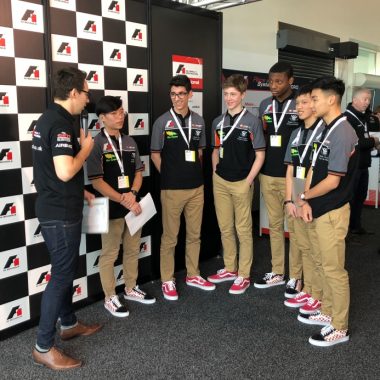 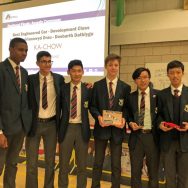 We recently attended the Formula 1 in Schools North Wales Regional Final on 6th March. This year we entered three teams, two of which entered as Development Class. These were first timers ‘Ka Chow’ and last year’s Entry Class winners ‘Ballistix’. In addition we had newcomers to the competition, ‘Team Asphalt’, representing us in the Entry Class.

The team members were: 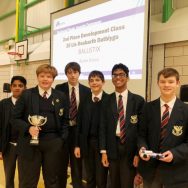 As anticipated, the standard of the competition was very high, with the overall quality improving since last year. Nevertheless our teams had worked hard and everything looked good on the day.

The competition requires teams to design scale Formula 1 cars using CAD software followed by aerodynamic profiling and prototyping using our 3D printer. The cars were then manufactured for us by Bangor University ready for our teams to prepare and paint. They also create engineering portfolios, verbal presentations and pit displays. We were delighted to place first and second in the Development Class. In addition to taking first place, Ka Chow also won trophies for the Fastest Car and Best Engineered Car.

Having won their Regional Final, Ka Chow had just two weeks to prepare for the National Final and went into overdrive. Scrutinising their regional scores and upgrading almost everything including re-engineering and manufacturing new cars, creating a corporate identity for their team and raising sponsorship. So on the 19th March we headed off to Silverstone for the second year running to compete in the National Finals. The quality of the work here must be seen to be believed and podcasts can be accessed at https://www.f1inschools.co.uk/latest-news/uk-national-final-2018-live-webcast-schedule/. You can see Ka Chow members being interviewed and racing in the podcast. Alternatively a short video montage will be posted on the Ruthin School Facebook page. Whilst we didn’t take a podium place we were proud to win a trophy for the most innovative team. Plans are already in motion for next year as we prepare for our first Professional Class team. Additionally we also hope to continue with Development Class and allow new students to join us in the Entry Class. 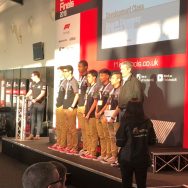