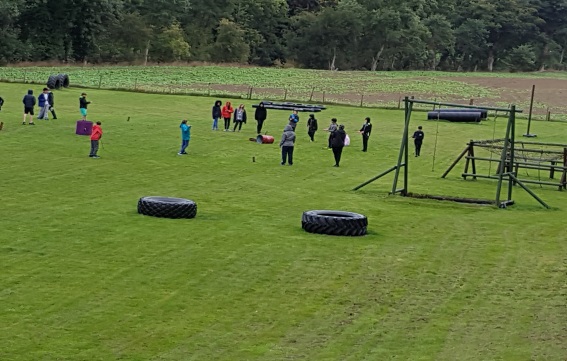 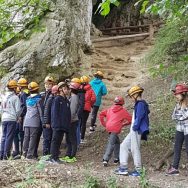 Last week Forms 1 – 3 enjoyed two days away from school so that we could really get to know each other and learn to work in teams. Thursday was spent at Talacre Beach in competitive mood and Friday was spent at Open Door Adventure centre in a more supportive frame of mind!

Upon arriving at Talacre, beach pupils were faced with a very large cardboard box which contained five envelopes. Each envelope contained a task, along with instructions, which was to be completed in a set time. The tasks were to be tackled in the specified order and each one was to be completed before the next envelope was opened to reveal the next task.

Task one was an environmental challenge where the groups were able to help the campaign to clear up the beaches; all groups approached this with determination and plastic gloves! Mrs Kenworthy’s group were extremely competitive and it was suggested at one point that their bag was so heavy that we should check no tutor group member was in it!

We then participated in beachcombing in order to create a piece of art. There were some really interesting creations and it was pleasing to see the focus on saving the environment.

The physical challenge which followed was welcomed and was a chance for pupils to stretch their legs and flex their muscles. This was a race against time – a race against time with a difference! Pupils completed a set distance as a team. Sound simple? Well, it was – apart from one addition: they were required to choose one member of the tutor group who would not touch the ground for the entire distance. This was not as easy as it first appeared as pupils needed to carry this person for the distance and so think about how to transfer them to somebody else without them touching the ground – teamwork!

The final two challenges were an observational challenge (a treasure hunt) and a structural challenge, both of which the pupils approached with gusto! There were Sand Sculptures appearing all over the beach and without exception, they were very imaginative and ranged from the Great Wall of China to a mermaid based upon Miss Webb!

Day Two was spent in a flurry of outdoor adventure. Upon arrival at Open Door, pupils were split into four groups and each group participated in one of four activities before moving onto the next. This meant that all groups got to experience team building games; obstacles; bush craft and caving.

The team building games were tremendous and some of our pupils got rather inventive with their solutions to problems! They worked together beautifully and most achieved the aims of the exercises.

The bush craft activity included building a shelter and, once again, there were some very interesting attempts, although I am unsure as to whether they would have kept the pupils dry and warm!

I was impressed with the confidence of all pupils as they disappeared into the caves. It was also noticeable how those pupils who were initially less than confident were supported by others. Some of the areas that they passed through were very narrow and it took a lot of courage to complete this task.

All in all it was a great day – despite the weather – and we even managed a lunchtime game of football. It was great weather for slide tackles!