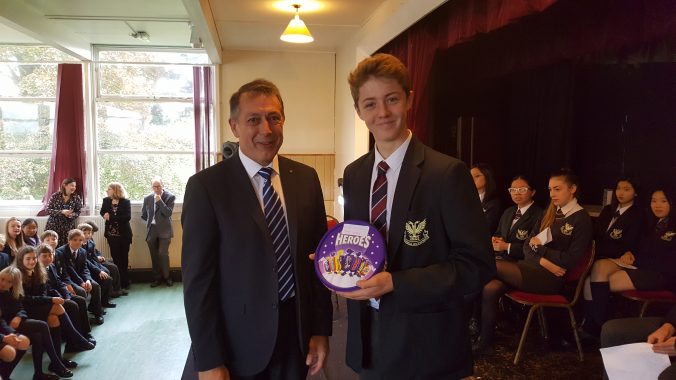 The final Friday of our first half term of 2017/18 finished with a charity run for CRUK organised by Brunel House. Students, staff and their families were invited to take part in a 5km run which twisted through the school grounds. We were thrilled to accommodate 121 runners in total who were spread across three age categories. When the start whistle was blown the large pack of runners was unleashed onto the course. Sioned Cordiner seized the initiative and took an early lead with distinctive athletic grace. However, Josh High and Sion Ellis kept her in sight and managed to overhaul her lead before the finish line. Josh and Sion crossed the line simultaneously in 22 minutes taking victory in the “11-18” category with Sioned a few seconds behind. Meanwhile, Ando Hannant (at the tender age of 8) was heading the rest of the field and crossed the line 1 minute later to win the “under 11” category. Milly Jones also put in a storming run to match Ando on the finish line closely followed by her father, Matthew Jones, who won the “adult” category. Well done to all of our serious runners! However, this event was not about winning a race – it was about participation and it was amazing to see students who usually spend their lives in a purely academic world getting involved and stepping outside their comfort zone. Then there were the fun-runners who came in all kinds of costumes and fancy dress. Callum McIlroy Collins and Alex Murphy stole the show with their Teletubbies outfits. It was great to see Alex inspiring the younger runners to finish the course and he was a deserving winner of the fancy dress prize. With each runner contributing £5 to CRUK and some getting additional sponsorship we managed to raise over £700 for CRUK. An amazing total and we are proud to make this donation to help the fight against cancer. Many thanks to all those who took part or donated.