This was the school’s first basketball game for a number of years. The school were playing Mold Jets basketball club. Ruthin started off very well and scored a number of points in the 1st quarter. It was a very good game with both teams playing good basketball earlier on. Ruthin and Mold made a number of changes which increased the tempo of the game. As the 1st quarter ended, the teams were tied 16-16. Both teams made further changes and began the 2nd quarter. Mold started off well and got an early pointer to make it 18-16. Unfortunately Matt (Ruthin) fell over during the game and suffered a dislocated elbow. Both teams agreed it was right to abandon the game and for it to be rearranged for after Christmas in the new term. It was a good first game for Ruthin as it was a close score against a club. 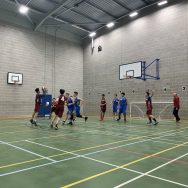 The school & Mold Jets send wishes to Matt for a speedy recovery.