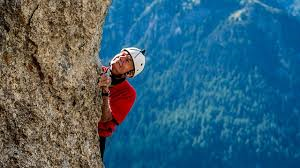 Are we too risk averse?

As part of their GCSE preparations, Form 5 students were asked to produce an article about whether Extreme Sports are justified in the modern world and whether we have become too risk-averse. All of the articles they produced were excellent: really engaging pieces of writing, well argued, fluent and controlled. However, Ela took it to the next level by referring to her own life – and the personal touches in this article mark her out as a special talent. Because it’s something which he would want to read in a magazine, her teacher, Dr Edwards thought it should be shared with other readers.
If at first you don’t succeed, skydiving isn’t for you (written by F5 student, Ela)

Extreme sports first gathered popularity in the 90s and it’s not hard to see why – the adrenaline and rush of excitement releases hormones such as dopamine and serotonin, so it is easy to see why it becomes so addictive. Extreme sports have developed over the decades from the absurd to the death-defying – it seems there has been quite an evolution since the craze first began. From motorcycles to extreme ironing the variation is significant and it seems there is something for anyone.

An area of particular interest of mine is BASE jumping, something introduced to me by Eric Jones – an 80-something, road-side cafe owner and friend of my granddad’s – who has climbed impossible routes on the Matterhorn and hot-air ballooned over Everest. However, he originally began in the mountains of North Wales and chimneys in closed down factories (this option didn’t go down so well with locals). His stories always fascinated me and it was he who initiated my obsession with extreme sports.

I vividly remember my first visit to the small cafe – a favourite of motorists and climbers – just off a route near Tremadog. We’d come on my Taid’s motorbike – one of my first journeys with him. My hair stuck to my helmet as I clumsily tried to wrestle it off, along with my heavy jacket – we were well into June, but the wind still rattled your body once you were in the mountains. Eric’s wife was behind the counter: he was seemingly on his fifth cup of coffee, deeply invested in his newspaper and oblivious to the quiet hustle around him.

One lemonade and an hour later we were well into his exhilarating tale of his journey over Everest. The tale-pipe of the hot air balloon had frozen with the extreme altitude and they were beginning to descend. Without a moment of consideration Eric had dangled himself – thousands of meters in the air – out of the basket and was heating the pipe with his lighter. He recalled this situation as one would a trip to the supermarket – though it wasn’t out of practice, he genuinely seemed unaware of his great feat. It was this lack of consideration of his own mortality that instantly grabbed my interest – he may have died, but he would have done so living an astonishingly full life and I vowed to myself to continue with this mindset.

In the numerous times we returned, Eric recounted countless stories varying from BASE jumping from the Eiger (the very first person to do so) and avoiding the reporters that came along with him. His motto, “Life is an adventure or nothing at all”, is what pushed me to try my very own extreme sports such as wake boarding and wild swimming in notorious areas – though admittedly I never reached the level of Eric himself.

Though Eric has since sold his cafe – he still sits there most mornings – his message has stayed with me. Extreme sports are not for the reckless and foolish, but for those who want to live life to the fullest and take every opportunity. Perhaps there is something to the extensive research and lists of hormones that supposedly is what attracts us to the experience. However, perhaps it is simply a love for life, adventure and not wasting a second of our limited time on earth.