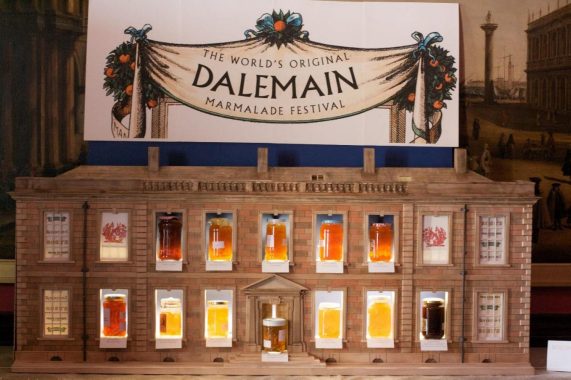 It is our pleasure to enthusiastically tell you about our new partnership with the Dalemain Marmalade Festival and Awards. Our partnership comes about because we have a somewhat unusual and interesting connection with Marmalade.

Here is our story:

Mr K.M. Thompson, English Teacher from 1970 to 1990, writing his ‘Ruthin School, the First Seven Centuries’ in 1984, relied extensively on the early school magazines in researching how the students lived.

Academic studies and physical exercise were priorities. Lessons began before breakfast and together with sports they occupied most of the day. Classroom windows reached no lower than 6 feet above the floor to exclude all distractions. When weather conditions ruled out rugby, football or cricket, compulsory cross-country runs, usually over the hills, took the boys far afield, but at all other times they were strictly confined to the school premises, which include ample playing fields.

The New Building, a fine stone structure on high ground on the eastern edge of Ruthin, is well seen from the Mold Road. To the east it commands a striking view of the Clwydian Hills, dominated by the impressive bulk of Foel Fenlli, atop of which can be seen the ancient earthworks of the prehistoric Hill Fort.

Mr Thompson, himself a keen and fit cross-country runner, devised a 6 1/2 mile circuit starting and finishing on the school fields, which traverses the domed summit of Foel Fenlli from north to south and can, in favourable conditions, be completed by young athletes in just under an hour.

He had noted in his studies of the School Magazine (of which he was editor for a number of years) how often former students referred to cross-country runs in ‘Letters to the Editor’. He notes that the older boys occasionally helped the single constable to run down escaped criminals. ‘One escapade related by an old boy records that one such case, in 1845, had ended in Corwen’.

Elsewhere he tells of an occasion when, in February 11th 1922, the home match against Chester College had been cancelled and the whole school was sent out on a paper chase. Two hares laid the trail to the River Clwydog, where they craftily split, taking one bank of the river each and alternately laying sections of trail on opposite banks. So, the unfortunate hounds were thus obliged to cross and recross the icy river ‘dozens of times. It was a
long, cold afternoon.’

It appears that ‘a pot of marmalade from the school tuck-shop’ was the prize regularly given for competitive runs, and was always enthusiastically received, particularly towards the end of term when pocket money was running
short and tuck boxes were almost empty.

Marmalade today is almost always understood to be made of citrus fruits, but when first introduced in English the word was widely used of preserves made with the rind of many fruits – apples quinces, dates, pears, apricots, citrus fruits – cooked with sugar or honey. Derived from the Greek ‘honey apply’ it has passed through Latin into many European languages. 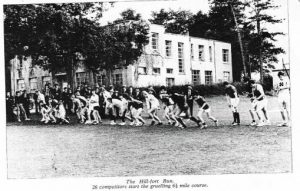 The first ‘modern’ Hill Fort Run on the course devised by Mr K.M. Thompson, took place on the 19th July 1978 and the winner received a pot of marmalade. All contestants who completed the course within 80 minutes, a standard laid down by Mr Thompson, received a certificate. This feat was achieved by sixteen of the field of 25 runners.

Every year Ruthin School continue the tradition of the Hill Fort Run. The next run will be held Friday 6th May and the winner will receive a pot of marmalade. Not just any marmalade!

Dalemain Mansion & Historic Gardens has been home to the Hasell family since 1679. The estate is an award winning delight and is part of the UNESCO World Heritage Site. The Marmalade Awards were founded in 2005 by Jane Hasell-McCosh, with the initial aim of preserving, growing and widening one of the most British of customs making marmalade. The first competition received 60 entries, but word soon spread and year upon year the number of entries continues to grow. The Awards have gone on to generate a humour and life of their own, inspiring people from all over the world to get involved. Over 3,000 entries are received each year, from over 40 countries including Japan, Australia, Lebanon, Canada, South Africa, Kenya, South Korea and Columbia. There are also now Marmalade Festivals in Japan and Australia.

The Homemade category of the Marmalade Awards has always been about supporting charities, namely Hospice at Home Carlisle and Hospices all over the world. Every year the full homemade entry fee goes towards supporting Hospice care, both in the UK and globally. Over a quarter of a million pounds has been raised so far.

Do you or a family member make great marmalade? It is not too late to send your entries into the competition and there are many categories, please feel free to click here for more information.

We will have jars of the winning marmalade to purchase and we will give you details of this nearer the time. 50p of the proceeds of every jar will go to The Hospice Charity.