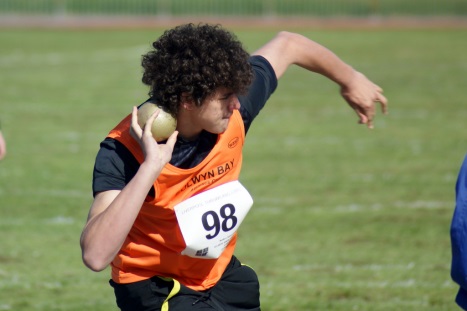 Nick has competed in athletics for both School and the Colwyn Bay Club for several seasons, but his rise up the rankings in UK Athletics began last season at the Denbighshire Schools Championships. Competing in the throwing events, he gained first place in the shot put and qualified for the County team and went on to represent the North East Wales.
Whilst the majority of students were taking a well-earned summer break, Nick was training for the shot put and competing at the Welsh School Championships in Cardiff. At U15 level, he achieved the ranking of second in Wales; this performance gained the attention of a Great Britain Athletics throwing coach. During the 2014 outdoor athletics competition at U15 level, he gained two gold and two silvers medals in the shot put and two silvers in the discus; he also competed in the javelin and high jump.
His throwing performances continued during the winter months at the Indoor Championships and, in January, at the Welsh U17 Championships he improved his Welsh ranking to first place in the shot put and also achieved a gold medal at the North Wales Indoor Championships.
Competing at U17 level in Club athletics he began his outdoor season earlier this month, achieving gold in both the shot and discus at the Liverpool Harriers jumps and throws competition and the following day, competing in the Deeside Open, he replicated his previous day’s medals tally. The following weekend he represented North Wales in the Youth Development League.
Once again this May, he will represent the School at U15 level in all three throwing disciplines. Ruthin School holds the Senior Boys Denbighshire Shot Put record.  Unfortunately, he cannot compete in this age group, but Nick has already smashed the record and, when he is old enough, I am hopeful that Ruthin School’s tradition in the shot put will continue.
This is an incredible performance record which takes time and effort to achieve and a great deal of time management to balance training and competition with academic studies. None of this would be possible without the support of others, especially his parents, coaches and athletics organisations; his athletic profile can be seen on the UK Athletics website. We wish him all the best for the forthcoming outdoor season, at both School and Club level and congratulate him on his achievements so far this year.