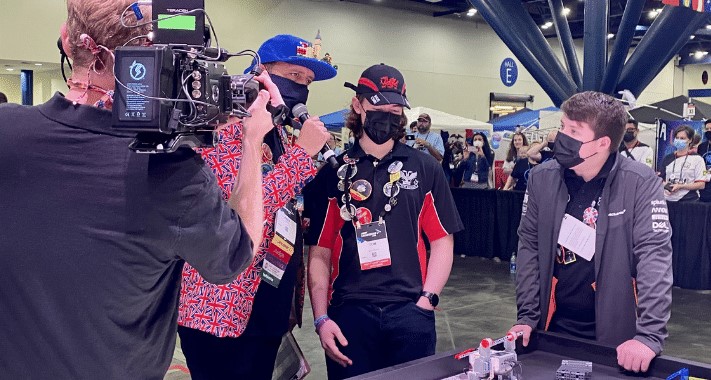 The summer term began last week, however Ieuan and Tom started the term with a trip to Houston with Mr Owen-Booth and Mr Bartlett to represent Wales in the International Lego Robotics Competition. It is such a great achievement for the pupils to make it into the International Championships, competing against teams all over the world. Read Mr Owen-Booth documentation of the trip below, highlighting some of the fantastic things that they were able to do and see whist in Houston.

Day 1 in Houston was a great day for sightseeing. We took the students on an open top bus tour of downtown Houston and learnt all about the history and importance of the five-flag city. However, since we were there for a robotics competition we couldn’t leave without a visit to NASA.

It also seemed that most of the other participants in the FIRST® LEGO® League had the same idea. While there we saw the only remaining functional Saturn V rocket, the full-size shuttle simulator and were amazed that we were able to touch them. We also attended presentations on life on the ISS and the Artimus mission to return to the humans to moon and then onto Mars.

The displays and presentations emphasised how vital robotics would be to the success of these missions and here we are celebrating the success of our young engineers! 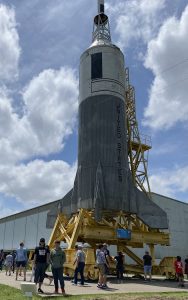 Day two of the First Lego League robotics world final was an administration day. This was our opportunity to set up our stand, rebuild the robot after travelling over 5000 miles and have a look at the other team stands. To say the standard was high would be an understatement! While we may not have had gazebos, 65″ TVs and sofas, that’s not what we were there for.

The day was interspersed with media interviews, briefings and receiving their medals for making it this far in the competition. However, in typical British understatement, when our team stated our technical intentions to the interviewer it was met with an exclamation of admiration. Let’s hope we can follow through on our aims.

Keen observers may have noticed the diminished size of our team. Unfortunately, three members couldn’t attend due to factors beyond their control. However, we know that Linus, Natalie and Arie were with us in spirit and telepresence.

We finished the day at the boy’s request with traditional American pizza, served by the slice and an early night while we dealt with jetlag. The following day was the main event and we have an early start. 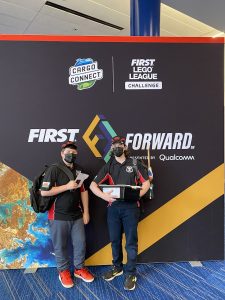 After travelling over 5000 miles it was the team’s first chance to see how the robot fared. In a cruel twist on behalf of the organisers this was done in front of brightly dressed judges, very enthusiastic MCs and cameras – no pressure there then.

Inevitably this demonstrated that the robot needed significant calibration, but we managed to perform at 65% our previous best and compared to other team reports we were pleased, nevertheless straight to the practise tables for fettling.

The actual competitions went in a blur of judged runs and further calibration. Our efficient design gave us an advantage here.

The afternoon was the team presentation to discuss the robot and innovation project; a drone assisted delivery vehicle to tackle the problems of online commerce deliveries in rural communities. The judges saw the value of the idea globally, but particularly praised the innovation in powering the drones to ensure seamless operation.

When talking about the robot Tom and Ieuan spoke with pride about the inclusivity of Robotics. The multicultural nature of the team, the mentoring of younger students and what everyone can get out of the project. The judges commented that it was clear they were not doing this just for themselves, instead a drive to include everyone and develop the engineers of the future.

As their teacher I beamed with pride, they had made it to the World final of a competition and yet they were more interested in how they could share their knowledge with others.

The evening was a block party, followed by burritos and tacos in downtown Houston and a well-earned rest. The next day was the head-to-head matches, bring it on! 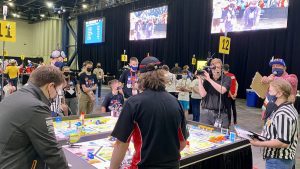 Day 4 was the head-to-head where teams competed in timed events against each other. With the now customary energetic presenters and judges building the tension we stepped up to the table. It started well, but then things started to fall apart. The look on Tom’s face said it all. Nevertheless they persevered, took their penalties and finished the run. Demoralised, but determined they walked from the table, however the score was far better than expected. Back to fettling – there were still two matches to go.

The second produced an almost flawless run, so our pride hung on the third. With apprehension they stepped forward and things went really well, missing just one target, unfortunately this was a high scoring object. We watched as the scores were compiled and despite two imperfect runs we were pleased with our placement, beating many far more experienced teams.

In the afternoon we perused the innovation fair and the advanced robotics competitions that were happening at the same time. We were all like kids in a sweet shop, teachers included, drooling at all of the gadgetry. Perhaps next year! 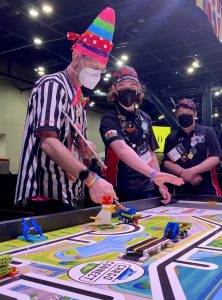 To end the day we took a walk in the sunshine to the Museum of Natural Science, stopping for a burger en-route – apparently people in Texas don’t walk, well you know what they say about mad dogs and English(Welsh)men. The palaeontology display was the best any of us have ever seen and the energy display, sponsored by Chevron, taught us everything we needed to know about oil refinement – I don’t think the green agenda has arrived in Texas yet. Another pizza for supper and back to the motel.

The following morning was prizegiving. We weren’t expecting anything, but we were looking forward to seeing how the teams we had bonded with had fared. We had a great time and will be sharing our insights with next years team. 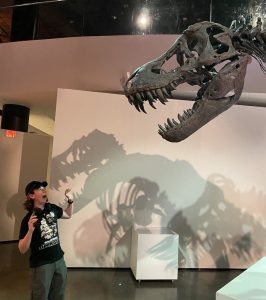 The final event was awards day. As already mentioned, as first-timers at this standard we didn’t really expect to win anything. Unsurprisingly, the World final of a competition of this nature is a quantum level above Nationals and therefore we were there to enjoy the day and celebrate the achievements of the other teams we had created a relationship with.

The final was a high-octane event with giant screens, sounds, and lights. For perspective, the First Lego League we were participating in was the smallest of the robotics competitions being held. There were five areas in the conference centre and we took just one, so I hope the photo of all the teams together gives a sense of scale. 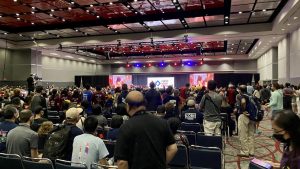 After the prizes, we joined the other British teams in the park for a picnic and the IET who helped fund our entry gave the Teams and coaches some small presents to remember the event, a nice touch. We thought we’d kill a bit of time shopping before our food tour in the evening only to be disappointed. The shops are within the underground tunnels that link all of the major buildings to avoid the summer sun and therefore Downtown Houston is strictly business hours! The city is split into three distinct areas and is so large it takes an hour to drive from one end to the other. So instead we enjoyed the park and the free Wi-Fi.

We arrived for our food tour at a small park where an eclectic group of people were gathering. An inauspicious start. However, as things got moving, our tour guides’ enthusiasm and knowledge of the city were infectious. This definitely wasn’t your usual tourist event.

The first stop was an authentic tex-mex restaurant, the food and the atmosphere were fantastic. The other participants were interesting and chatty as we continued the tour, dropping into the tunnels at Chase bank to stop at a Filipino restaurant where the proprietor served us his mum’s crispy chicken and rice. Although already quite full by this point, the tour continued and there were three courses to go.

We were shown the historic buildings (well 1920’s), including the Rice hotel, Kennedy’s last stop before his assassination. The guides discussed how the state went from a Mexican state after the battle of the Alimo, to a sovereign state when Texans retook the area; 10 years later it was annexed by the USA.

Our final stop was an Italian restaurant for pizza, pasta, and cheesecake. This was the perfect way to end our week. All that remained was packing and a long journey home, tired, inspired, but satisfied.