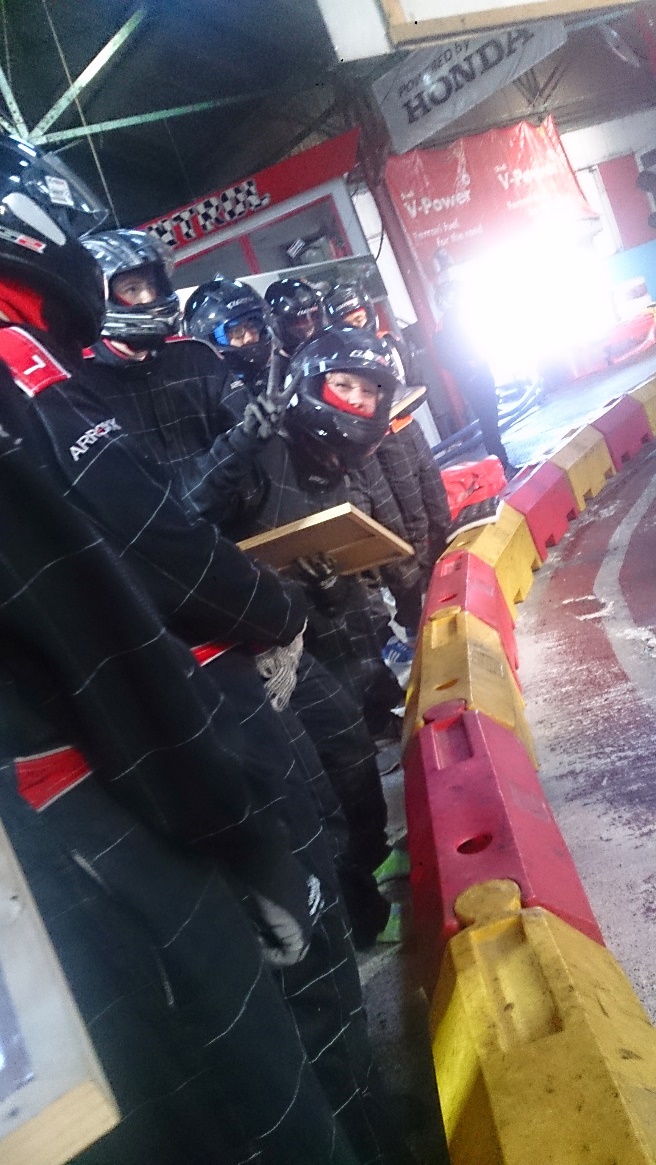 On Wednesday afternoon we set off from school 12:30; bus banter the entire journey, obviously with a bit of a sing along. On arriving we bundled out of the bus, crossed the yard and entered the building, where we all squashed up against the window to see the track, nattering with excitement.
Signed in, suit on, and in the briefing we were told the safety precautions, after that it was team time. In groups hustling over the order of who’s in the kart, who’s next and how many minutes we each get, we then had to get our balaclavas, gloves, and helmets and we set off for the practice.
During the practice, we quickly learned whose team was fast, slow and tactically sneaky and conjured up a plan of how to avoid, escape and beat each other. It was very competitive, for some more than others… Mrs Kenworthy. ƒº
This is where everybody began to get comfortable with their team’s kart, each becoming faster and faster on the track. As people slowed, stopped, and entered the pit lane, everyone became quicker and quicker at each swap over of the driver, the excitement increased, entire teams were jumping up with the anticipation of a fast swap and to watch them speed off.
We did however have a few slip-ups, Mr. Welsby was rammed  from behind, so much so that his helmet somehow slipped off his head and he crashed into the red and yellow barriers, almost knocking over the karting staff. However, this was the practice, you’re supposed to crash, so brushing it off people then whizzed off in the karts, chasing the person in front.
After the practice, this was it; the race was about to start. Timers ready, the fastest person in the practice at the front of the line-up. The person to race next bobbing and bouncing with excitement, teams hunched together whispering plans, and cameras at the ready.
Then came the worried anticipation of calling in a driver, and the confirmation from the racer with a single nod. Karts came in, the next driver at the ready with bubbling eagerness for the swap over. The new driver was now ready, leaving the team behind to anxiously spectate or aggressively shout at them.
Spectators were constantly watching the leader board; the fastest lap, the fastest team, watching where they dropped and where they had risen. After the last five minutes were called, sneaky tactics were summoned in the hope that you’d move up the board.
To conclude, it was found that the slowest lap was performed Mr. Hamer  and the fastest lap belonged to Harriet.  In 5th place was Newton. In 4th  was Churchill. 3rd was Brunel with Austen 2nd and Elgar 1st.