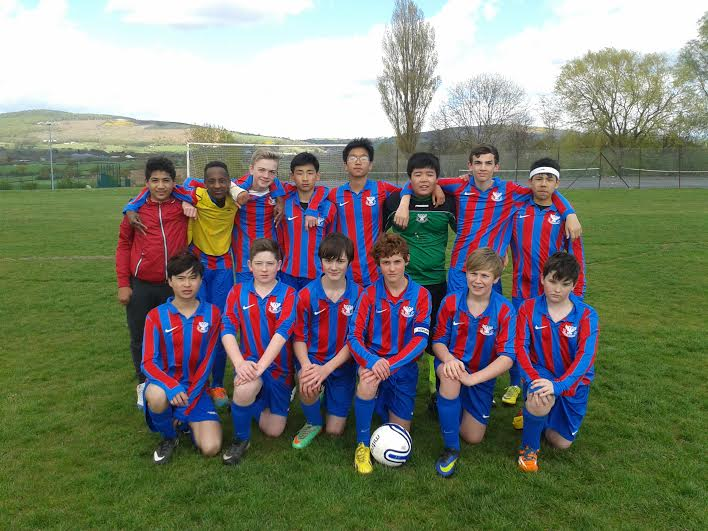 ~~Ruthin School’s Form 3 team travelled away to Glan Clwyd for their second game this year. The squad was as follows: – Qing in Goal, Alex at Left Back, Hugo and Minh at Centre Back, Oliver at Right Back, Iestyn (C) and Osian at Centre Midfield, Sam H on the Left Wing, Christopher on the Right Wing, Thomas B and Taewoo playing Striker. Jack W, Elvis and Abdullah were brought as substitutions.
The game started well for Ruthin School as an early
through ball from Thomas found Taewoo who put it in the back of the net. It looked like it was going to be a good, positive game for Ruthin but perhaps they scored too early. Their confidence rose and their guard dropped. The home team made four consecutive through balls straight through the defence allowing Glan Clwyd to score each time giving them a 4-1 advantage. These flurries of attacks put the whole side in a daze which wouldn’t be broken until the second half. Due to this fact, Iestyn (C) was getting very frustrated and wasn’t helping the morale of the team. Everything was falling apart. At half time a substitution was made, Minh went Right Back, Tom went Centre Back and Abdullah came on as a striker. It was expected that our starting striker would pull into the lead but he needed a team effort to help him, which he didn’t receive.
The second half started, and Iestyn had some new found energy. He sprinted up to the opposition as they kicked off and their momentary delay cost them, as he sent the opposing player flying as he stole the ball and let them know that he was there. From then on Iestyn continued to battle hard which eventually concluded in him giving an excellent cross field ball to Christopher, who managed to slot it in near post. Despite these brief moments of great play, Glan Clwyd would not be silenced and continued to slot through balls through the middle; however, Tom did a good job of minimizing these risks. The whole team now battled harder with new energy but as they scored 2 more goals Ruthin’s heads went down. Attacks were made down the wing by Christopher, who nearly scored several goals but couldn’t pull the trigger early enough. After a while Alex went off and Osian dropped to his position, allowing Jack to come on at Centre Midfield. Elvis also come on for Sam on the Left.  Everyone was now tiring and this meant some of our players got injured. The game ended with a 6-2 defeat. However, their left wing had just been signed for Man City! Taewoo played very creatively and had many shots on target; despite this their keeper was on form and saved them all. A special comment should be made regarding Qing, our keeper, who made some superb saves. Man of the Match was given to Iestyn.