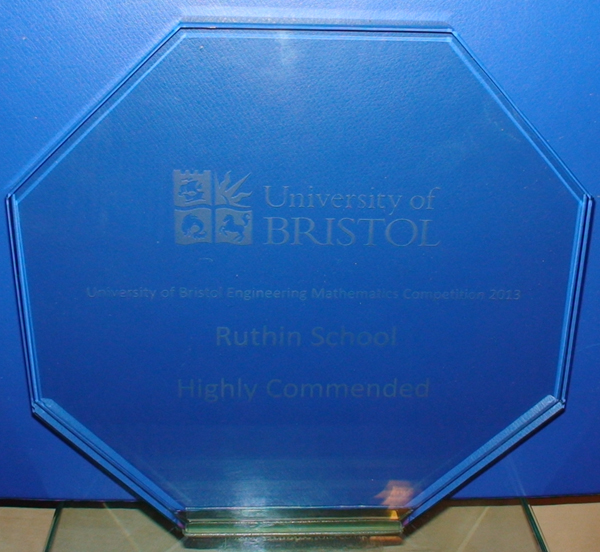 How many cars can you fit into a car park? This was a problem posed by the Engineering Maths Department at the University of Bristol.  So Sixth Formers, Arthur, Stephen, Uliana, Anh and Patrick (team leader) took up the challenge. The specific problem posed was to fit as many car parking places as possible in three differently shaped car parks. The most challenging shape was a circular car park and the Ruthin team came up with a beautiful solution using concentric circles with the places set out in each circle in a herringbone pattern. To optimise the number of spaces drivers were only allowed to drive around the circles using a one-way system.

Out of the sixty submissions there was one winner and seven which were Highly Commended: Ruthin School was Highly Commended.  So on 16th October our team went to Bristol to receive their award, a fine glass trophy on which the name of our school was engraved.  The team saw the university close up, and had a tour of the Engineering Maths Department. As we walked back to the railway station we had some spare time so we called into Bristol Cathedral – an impressive and truly wonderful Gothic building.  It was a weary but happy group who sat down on the train home – a fine end to a mathematical journey of discovery!