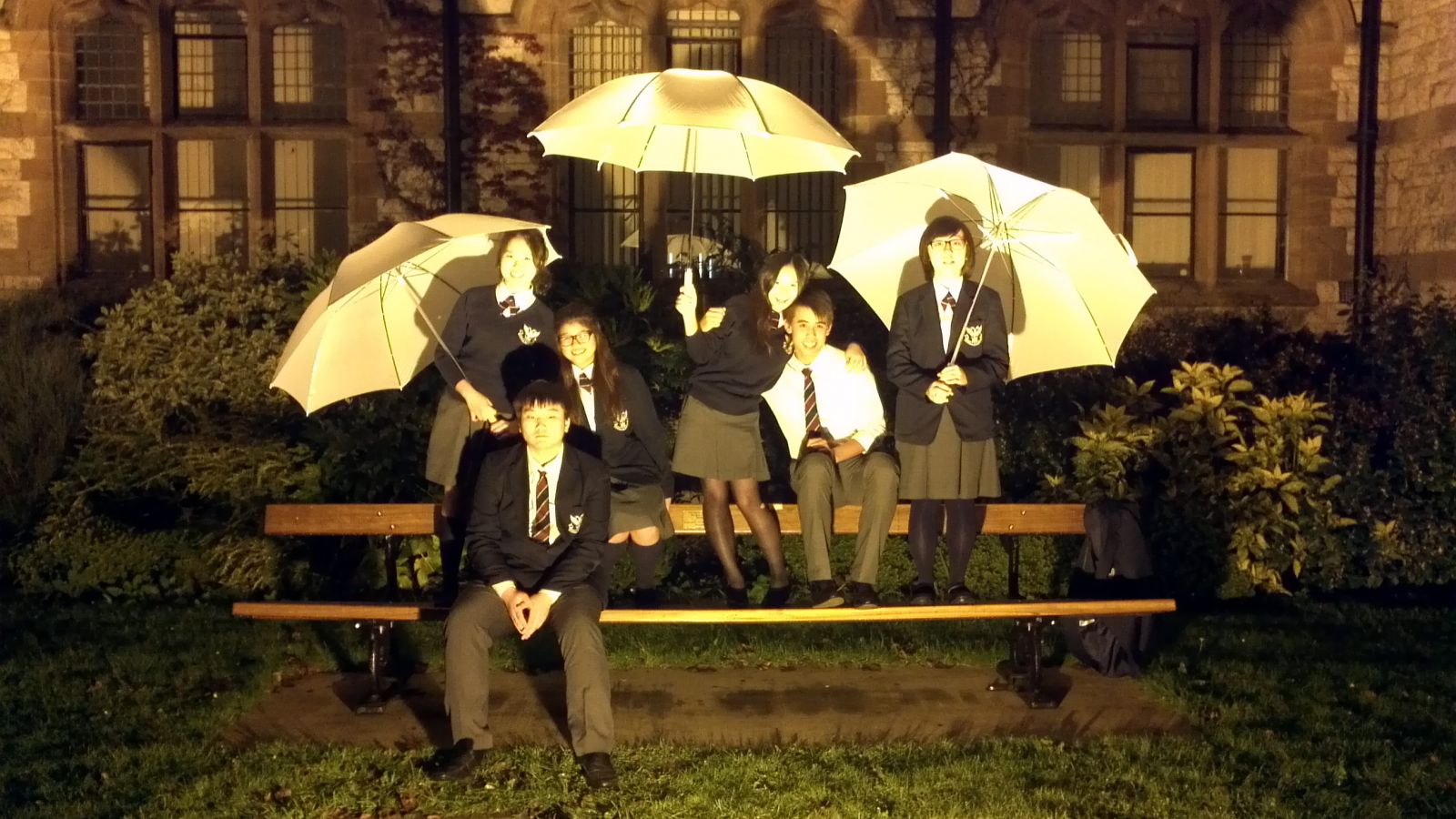 So, to enter the competition, we had to choose one of ten projects and then work through ten activities – 10 projects x 10 activities = 100 activities to represent 100 years of English language provision. We decided to do ‘Project 2: Friends Forever’, which meant we had to produce a short play on the theme of friendship. However, we decided to adapt the project to suit our class and to make it more personal. We decided to make a short video based on the popular US sitcom ‘Friends’. Many of you will be familiar with the six characters – Joey, Chandler, Ross, Rachel, Monica and Phoebe in this comedy show. This was a perfect model for our version of ‘School Friends’ as there are 6 of us in our EAL class. We decided to play ourselves – Pocky, Lulu, Gigi, Bianca, Victor and Archie. However, the video is only the final product! Before we got that far, we had to work through ten different activities to help us prepare for the making of our mini movie, which you can see on:

and as we had to continue with our EAL lessons, we had to do quite a bit of work outside lesson times. This is what we had to do in preparation for the whole competition:

We did a quiz called ‘What kind of friend are you?’ and then Ms. B, our EAL teacher, asked us about what qualities we looked for in a good friend, which we discussed class. She then gave us some vocabulary exercises to describe people’s appearance and character and discussed which we thought were either ‘essential’ or ‘desirable’ qualities in a friend. We also learnt how to make the opposites of some of these words using one of four negative prefixes i.e. un-, in-, im- and dis –. Ms. B then gave us a test on these!

We used the words from Activity 1 to write a newspaper article about what makes a friend your best friend.

Ms. B showed us an episode of ‘Friends’ – but we couldn’t just watch it. She made us do various reading, writing, listening and speaking exercises throughout the whole thing!

Activity 4 – writing our own screenplay.

We discussed the setting, main characters, the scenario, the title and the first line of the screenplay and from there, we came up with our script – we shouted out lines and ideas and Ms. B wrote them up on the board. We then copied the script into our books to type up later. It took us a whole week to do just this. You can see the final script at http://www.ruthinschool.co.uk/Cambridge_EAL_Screenplay.pdf .

We had to discuss how we were going to film each section of the script and what type of camera shots we’d need – close-up, medium or long shots. We worked together as a team and Ms. B said we had to speak English the whole time, which we did. The good thing was that we got time off prep to do this!

Having learnt our lines, we then acted out different sections of the script in class before filming began. We also had to decide when we were going to do the filming and what props we’d need – thanks for the old bandages Matron! We also realised that we had less time to complete filming as Archie was going home a week early for half term!! It was his mum’s birthday!

Activity 7 – preparing the theme tune for our video.

Ms. B let us listen to the original theme tune to ‘Friends’, which is ‘I’ll Be There For You’ and is performed by ‘The Rembrandts’. Well, again, she didn’t just let us listen to it, she took words out and we had to fill in the blanks and look at the rhyming scheme – she said it would improve our pronunciation! We then spent prep time writing our own lyrics to the same song and we have reproduced them here:

So no one told you school was gonna be like this

Your grades are bad, there’s prep, and lessons you can’t miss

When all you wanna do is have a rest!

There’s still prep to do

(And the teachers give you more)

There’s no time for you

(And only one thing is sure)

If you’re in school

(Then everything is cool)

You cannot sleep, you’re stressed and school starts at eight

You know that breakfast will be bad,

Prep’s not done and your teachers will be mad

It is half term soon

(Then we can go and have some fun)

(With no rain and shining sun)

No more prep to do

(Just some time for me and you)

Vicky, Mr. Sennett’s (our new music teacher) wife, helped with transposing the music for this as did Anh Ngyen (Upper 6th Form).

We had to practise singing our new song before recording the final version for our movie. The choir was made up of the students from the other year groups – so thank you for helping us! Anh played the piano and the six of us had to learn how to open very big umbrellas in a confined space and not poke each other’s eyes out! Ms. B was a bit worried at this point!

This was probably the most exciting part. We had a lot of fun – especially when things went wrong! Watch the bloopers at the end of the movie! We spent one Friday evening and all day Saturday on this activity. The girls then had to re-record one of the scenes on a Wednesday afternoon when we realised it hadn’t recorded properly, in fact, not at all! The Upper 6th formers also helped us – they played our teachers, and we also had help from some of the other students – again, thank you for helping us.

We had to wait all day for it to stop raining before we could take the official photo for our competition entry – see above.

Finally, we just wanted to say that we had a lot of fun making our own episode of ‘School Friends’ which is titled ‘Friday 13’ and is about a not so typical day at Ruthin School. We also spoke a lot of English, learnt and used new vocabulary and hopefully improved our pronunciation. We hope you enjoy our mini movie as much as we did making it!

and Archie Bekenov (all Form 5).